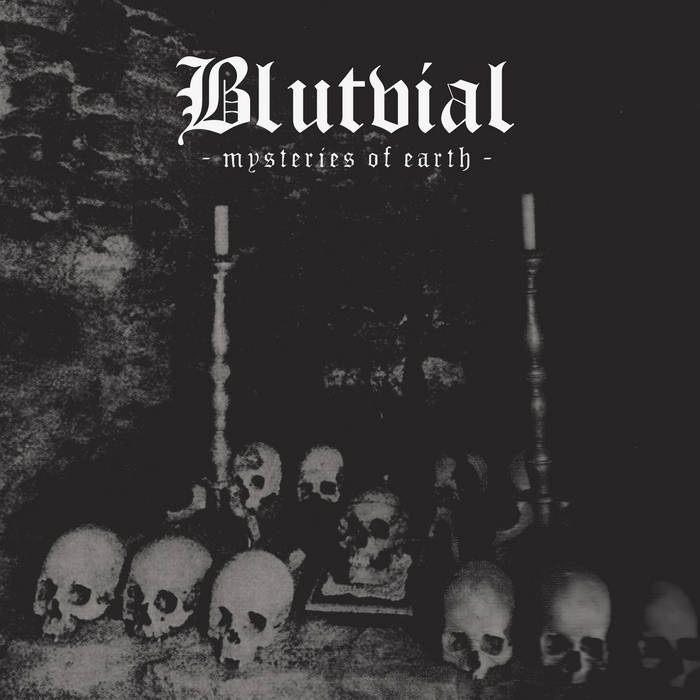 Metallurgical Fire Listen to the riffs on existential rite and you’ll have to buy this. Mysteries of earth is an album that fires riffs at you so fast you won’t quite know what’s happening. You’ll love every minute. Favorite track: existential rite.

Entleiber Black Metal that doesn't disappoint! Fast, rousing riffs and well-written songs. Wilder than the woods at night. This is where the rite begins. Favorite track: existential rite.

samaelrocks The entire album is awesome but why I love it? Just listen to the song, "Where Graves Spring Open." Favorite track: where graves spring open.

Heidens Hart Records is proud to present chapter v of Blutvial, “mysteries of earth". Emerging out of nowhere, this raw piece of necro filth and grim hatred is finally released on digipack CD July 2018. With “mysteries of earth", Blutvial is presenting a melancholic and harsh output of unholy black metal in the classic Scandinavian riff-based tradition of the early and mid 90s, reminding of Norwegian gems by bands such as Thorns, Kvist, Strid, Gorgoroth, Obtained Enslavement and, of course, Burzum. Anyone who is still spellbound by the early outputs of those bands will have found a new gem here.

“mysteries of earth" was recorded across the seas by Ewchymlaen (of UK outfits Reign of Erebus and Acolyte’s Ruin), Aort and Andras (of renowned U.K. avantgarde black metal act CODE as well as INDESINENCE), with Tiúval (of ISRATHOUM) on drums. A draconian asseverence schemed, convened and ejaculated by Blutvial - the album is self produced by the band so expect a pure and unpolished sound coming straight from the source. Adorned with an uncomplicated yet effective performance and production, revealing in the most optimal and fitting way the focus on relentless riffs and aggression that will instantly draw you into the dark universe of Blutvial.

The Sound Not The Word: "The album is filled with the kind of music that cuts to the core of the ‘traditional’ black metal sound, as if the genre reached its final evolutionary state somewhere around 1994. This is no bad thing; there is a genuine delight to be found in records such as this. This celebrates the sounds of old, as fresh and vicious as ever."

9,25/10 Metal Brothers: "What quality in the compositions, what a mixture of more perfect styles, that instrumental development and that cadence in the rhythm, inevitably catches you every moment of this particular work."

85/100 Zwarte Metalen: "The nostalgia relives on this piece of harsh violence"

8.5/10 GBAHBL zine: "Blutvial might be a throwback but they’re going to leave a mark with this release."

4/5 Babydolls And Razorblades: "This is one incredible album and an absolute beast to listen to. Top marks to the band for releasing this wonder."

7/10 Necromance Magazine: "Guitars are like sharp and pointed knives, real blades, the battery is a hammer that destroys your skull, beating it constantly, with a voice torn from it hell."

7/10 Metalnews: "Pure black metal, played with the guts and with a faith of the early '90s. A music that reminds us of a time when some did not hesitate to join the acts to words..."

Third Eye Cinema: "Some of the worst production I’ve heard in black metal for many a year marks this UK act. One of the most poorly produced black metal albums outside Nattens Madrigal."

No Clean Singing: "Magnetic guitar work — the drumming is off the hook, the vocals are ugly as sin and wilder than a pack of hyenas, and the song as a whole explodes with infectious energy. It’s a vicious, vibrant joy to behold."

Scumfeast: "It's easy to see how BLUTVIAL moved their own ways a notch more extreme."