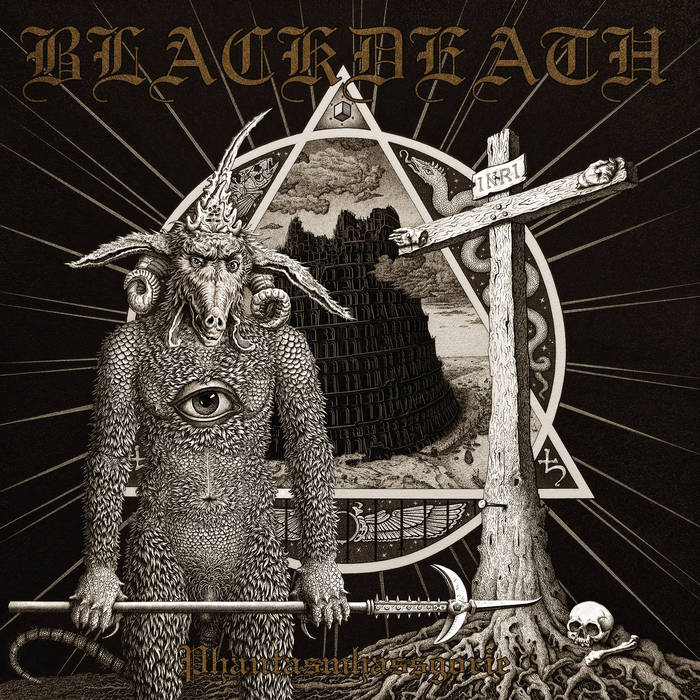 YomaBarr You know when you come across an album and your whole body tells you: behold, stupid brain, this is something extraordinary? Goosebumps all over the place from the very first minute. Also, the concept.
22 years in the scene and still able to make something like this, respect.
Also, hear this bass.

madmaxx666 Excellent, the drumming sounds fantastic, real evil feel and outstanding artwork. Probably their best record yet. This band should be more praised.

Blackdeath debut was released in 1998; band is even older when including their demos released as Draugwath and Black Draugwath, which puts them among the originators in the genre. Throughout the years, albums were released through labels such as Northern Heritage, Hospital Productions, Drakkar Productions. 21 years after the debut comes "Phantasmhassgorie", the unusual name for the ninth album of unusual band. A conceptual album around hate. Nauseating and possessed riffs, hateful vocals in German as always, great compositions and performed with military precision. Throughout the years, the band has toured Europa on regular basis with bands like Inquisition, Barathrum, Archgoat, Countess, etc, and as such always managed to escape the trendy subcategories of the genre and create true black metal for devotees only. Let us not forget, this is sincere and genius dark black art. Blackdeath means black metal.

Other Blackdeath titles still available here or from our mailorder at www.heidenshart.nl/mailorder


9/10 Metal Observer (ALBUM OF THE MONTH): "Not many bands are able to continue with passion and conviction after a twenty year career, even less are able to constantly shift and experiment with positive results. With Phantasmhassgorie, Blackdeath remains Russia’s finest black metal export and show no signs of slowing down."

4.5/5 Stormbringer: "A lyrical masterpiece. Lots of exciting references and historical symbolism are hidden here. This album is a scene of diabolical apocalypse"

8/10 Metalbite: "I'm in shock as to how good the album is, I can barely move away from it without contemplating another spin; hence, it certainly can be placed amongst the titans released in 2019 thus far. A genuine understanding of synoptic black metal song writing techniques."

8/10: Metal Temple: "The album is driven from primal emotion and good musicianship on every level. "

GBHBL: "The sound of hate and disgust

Unholy Black Art Of Ritual: "In many aspects a unique album, as expected from Blackdeath. A hateful piece full of conviction and philosophy."

The Independent Voice: "‘Phantasmhassgorie’ is a strong showcase of Blackdeath’s strength and agility by having lightning fast songs at impressive lengths, and the guys have certainly got down the ideology behind their evil, anti-Abrahamic lyrics, and the overall tone of the release said they pulled no punches – but this really is another album that will probably wow your nerves"

Hospital Productions: "Total Russian torture unit is back to crush any assumptions of what black metal is and was and can be. Disturbing angular and stressful black metal that only veterans can produce. Simply put, Blackdeath plays black metal."