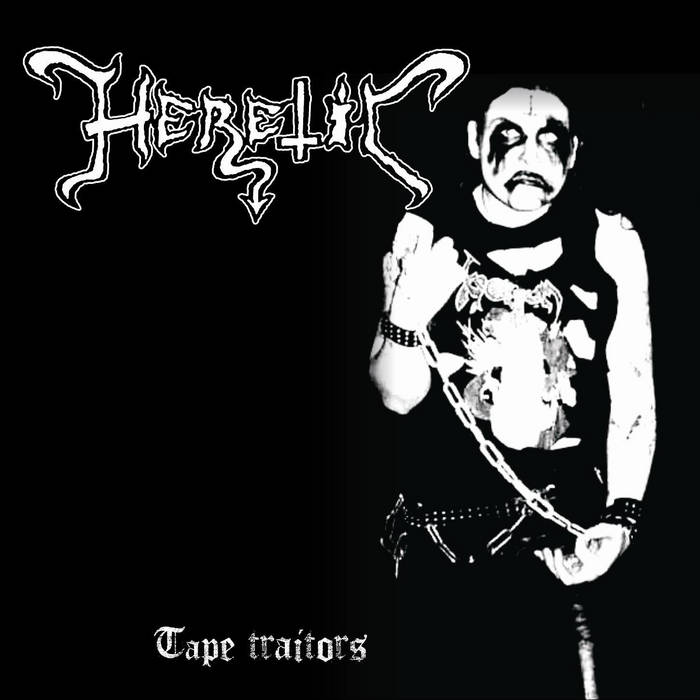 "Tape traitors" DOUBLE CD 2017
A monument of a release compiling the bands' five demos recorded between 1997 and 2002 plus a bunch of unreleased and rare demo tracks, outtakes and compilation tracks, for a total of 37 tracks / 2+ hours. In the 90s, almost no one played this style of primitive and harsh midtempo black metal. The band was influenced by their comrades from Beherit, Barathrum, Blasphemy and other obscure acts that roamed the underground in those days. On this compilation, you can hear early versions from tracks that later appeared on "Black metal holocaust", one of the most possessed and pure Satanic albums ever recorded in the Dutch underground. Comes on double CD with a big fold-out booklet with many old photos and liner notes by Goat.

Heretic - the legendary juggernaut of sleazy black metal punks they are known as these days, started a good 20 years ago as a bass laden distorted lo fi mixture of black metal and doom; an obvious but respectful Barathrum and Beherit worship to glorify Satan. Simultaneously, Heretic, among only the filthiest of the black metal scene, raised a giant middle finger to the emerging cesspool of theatrical clowns that claimed to play black metal at the time...

Heretic officially released four demo's before their debut album, in which they already displayed plenty of variety within their primitive approach; Thy Worship was a unique but convincing pitch black homage to the legendary band Barathrum; Hells Ceremony a primitive black doom trip to the very depths of the abyss; Pentagram Kult a relentlessly destructive force from hell which - till this day - retains its powerful energy through sheer simplicity; and Angel Destruction, which combined the characteristics of the previous demo's in a more focused approach in 4 distinctive yet relentless black metal attacks.

This stuff has become hard to find - but not hard to keep for the true Heretic maniac. The first cd, "Black Metal Holocaust", was released and it was great, but if you knew better, it was just a bit too clean...

Heretic thought the same thing as their second album was a complete lo fi reaction to the debut's cleanliness. Over the top and living up to its title, Devilworshipper was released. The vinyl release contained a few extra tracks which were also released as a separate demo, which is included in this collection as well. The demo, Sins From The Basement, sounds exactly where Heretic was at the time - lurking in the dark with a sound so extremely disgusting only the true underground fanatic would be able to appreciate it...

These demo's are the vile and ugly black metal roots from which 20 years of devil worship sprung, so here you go. Now start praising Satan or fuck off!